On Sunday nights, a group of friends and I gather to play Dungeons & Dragons. This is the chronicle of their tale. (This post contains spoilers to “Curse of Strahd”)

After waking from their rest in the winery, the party prepares for the day. Malis continues to feel the drain from the poison she drank. Rolen remembers something he found, and goes and drags the chest full of coin halfway through the winery to reveal it to the group, who all agree that they shouldn’t take anything because it belongs to the Martikovs. However, Cairie sneakily takes a handful anyway.

Khurz and Y’shaarj run out to the copse of trees beyond the winery, in which the rest of the Martikov family hides, and meet Elvir and Adrian Martikov, Davian’s other two sons. Khurz tells them of Davian’s death, and of Urwin’s capture. He then attempts to give them their only remaining bottle of wine. The brothers, believing the group will be going up against Strahd, say to keep it.

They tell Khurz of Yester Hill – where the druids live, and of Baba Lysaga in Berez. These places are where the brothers believe the last two of their three magic gems are since being stolen. These gems power the winery, and infuse the wine with hope. Adrian asks the party if they would be able to retrieve these gems, but knows that it is much to ask. In fact, they tell the party to not go to Berez to face Baba Lysaga, for she is far too powerful.

Y’shaarj tells them that most of the wine stored in the cellar has been destroyed, and tells them not to drink the wine in the fermentation vats, as it’s poisoned, and they already tried it. Elvir then gives Y’shaarj a Potion of Vitality for their trouble. Though, without the gems, and with the wine stock destroyed and poisoned, the brothers concede that this is the end of the winery, and of the hope in Barovia.

Y’shaarj gives the potion to Malis, who is instantly cured of the poison in her body. With that, they’re ready to go. They head to the main road and go south toward Yester Hill.

On the way, Khurz decides it’s a good idea to tell everyone else about Madam Eva’s tarokka reading, and of the items and allies they are to find to help them defeat Strahd. He says a tome would be in an old mill – most likely Old Bonegrinder;  a holy symbol would be with a wounded elf – the party suddenly remembers Savid, whom they met in Argynvostholt; and a sword of sunlight would be in a drowned village – that’s where the party thinks Baba Lysaga dwells: Berez. He also recalls that they would meet a two-headed man of music in a dwelling of sorrow who could be an ally, and finally that they would face Strahd in a hall of bones within his castle for their showdown.

With the recalling of all of the series of events since Khurz and Cairie have arrived in Barovia, Malis learns that they traveled with her old friend, Gilrean the elven monk, and that she was taken by Strahd some days ago. This affects her deeply, and she reveals something to the rest of the party. While she was under the Feign Death spell, she discovered that there is no way out of Barovia…that, when you die, you are trapped here forever.

The others ponder what this could mean, and – if that’s true – then how do people get here? Ezmerelda then tells the party that it is because of her people. She reveals the history between the vistani and Strahd, and how they are free to come and go through his realm as they please. They lure adventurers to Strahd’s domain. She also tells the party that there are older, stronger, darker powers in Barovia than Strahd, asking them, “How do you think he got his power?” hinting at the dark domain’s true nature. 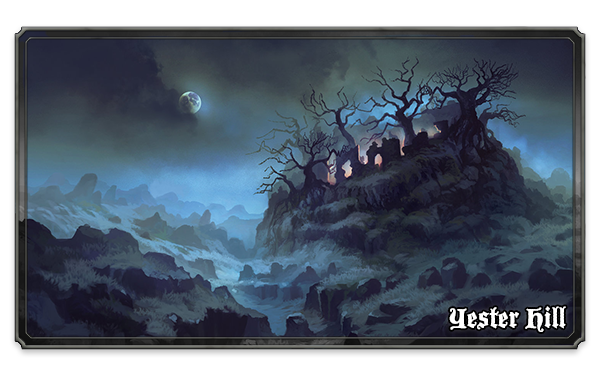 The party arrives at Yester Hill. They climb to the top to discover a field of dead grass and a humongous, towering wicker statue of a man with fangs, at the base of which is a figure. Cairie stealths onto the field while Rolen goes invisible and heads toward the figure. Cairie is spotted, however, and three druids appear and begin attacking her. Rolen discovers that the figure at the statue is Urwin, and he’s roped to the thing.

More druids start appearing from the other end of the field, dragging the captive Ireena with them. Strahd, astride his loyal nightmare, appears near Ireena and watches the druids bring her toward the statue. The rest of the adventurers run into the field…and the battle begins.

Rolen works to free Urwin. Krossa makes his way toward Ireena. Raif runs around the field and behind the statue. Khurz, Malis, Ezmerelda, Cairie, and Y’shaarj all work against the many druids on the field.

When Cairie moves to a new vantage point on Strahd, two berserkers come out of the ground next to her and begin attacking, drawing Ezmerelda and Malis’ attentions there.

With Urwin free, he and the invisible Rolen start running toward the entrance to the field, and are chased by a druid.

Strahd dismounts, grapples with the dwarf Krossa and bites him, draining some of his lifeforce! Khurz and Y’shaarj start to focus their attention on the deadly lord Strahd.

Raif reveals his intentions all along when he mounts Beucephalus, Strahd’s dark steed. He taunts the ancient vampire, teasing that he has his horse. But Beucephalus isn’t useless. The dread nightmare rears back and takes off into the sky, and then disappears into the Ethereal Plane with Raif. They are gone. 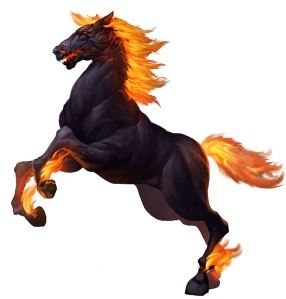 Strahd then takes and bites Ireena – this being the third time – finally killing her. He holds onto her and uses her against incoming attacks as a human shield.

Druids drop like flies as the party attacks, but the berserkers prove more difficult.

Strahd, fed up with this game, casts Blight right in Khurz’s face, forcing the half-orc to tap into his racial ancestry just to stay on his feet!

With Krossa, Khurz, Y’shaarj, and Cairie all moving in to take down the evil ruler of Barovia together, Strahd casts a close-range Fireball spell – which Y’shaarj attempts to counterspell, but fails – hitting all of them. Two of the adventurers stay on their feet, and two fall to the ground, unmoving.

With that, Strahd makes his escape with Ireena’s body.

The remaining adventurers finish off the berserkers.

Ezmerelda and Malis feed Y’shaarj a potion, and Cairie stabilizes Krossa from dying.

Ezmerelda goes to Khurz, and informs the others that he is dead.

We’re back!! I’m so excited that my personal life has cleared up a bit so that we can continue our Curse of Strahd campaign on a regular basis! I’ve been doing a lot of work in the community theater area for the past almost-a-year, which makes also putting time aside for D&D very difficult. So, now that I’m taking a break from theater for a while, we can continue our story. Thanks for staying along, and for keeping with us!

This session was INTENSE. I knew it would be. Yester Hill is a big encounter spot in the book, and I knew it would be even moreso with Ireena in Strahd’s possession. Sadly, I had a plan on how to run this encounter differently, but – for whatever reason – my brain didn’t do what I had planned. When the characters arrived on the hill, I gave a different description than what I had wanted to. I have no idea why this happened, and I’m slightly frustrated with myself because of it.

But, that being said, the session was still a success – in my mind – because of how big, epic, and memorable it was. Raif’s player – as you may recall – was kicked from our game due to personal grievances with some of the group, and so I had to run the character myself. Since I still wanted to honor the player’s intentions, I knew that this would be a good opportunity to not only do that, but also remove the character from the game for a while so I didn’t have to run another NPC/PC.

Way back when Raif first saw Strahd’s nightmare, Beucephalus, he swore he would one day take it from him. Since I was going to have Strahd and his steed here, I knew Raif would take this opportunity to seize the devil horse. When it came to Raif’s turn, and he tried to mount the horse safely, I rolled an Animal Handling check to see if he succeeds…and got a natural 20. So…it worked. However, Beucephalus is only loyal to Strahd, so I balanced this out by having the nightmare fly into the air and go ethereal, kidnapping Raif into the Ethereal Plane and taking him away. Only I know where Raif will be throughout the rest of the campaign.

I was hoping the party would save Ireena, I really was. I wanted them to be able to take her to Krezk and see how things work out for her. I like that ending for her,  because it infuriates Strahd and puts him on the warpath from then on. And that sounds like fun. But, instead, Strahd got his wish…and bit Ireena for the third time. He’ll take her back to his castle, and we’ll have to wait and see what becomes of her.

And then there’s the other death. Khurz the half-orc cleric. A great character played very well by our player, Seth. He was one of the original four characters that came to Barovia in the first session. Now only Cairie remains, the last of those 4.

How will she take the loss of her last adventuring partner? What will they do now that Ireena and Raif are gone? What is the next step in their journey through the punishing land of Barovia?

Come back next week to find out.

Until then, Well Met!