On Sunday nights, a group of friends and I gather to play Dungeons & Dragons. This is the chronicle of their tale. (This post contains spoilers to “Curse of Strahd”)

Fletcher, actually only unconscious, is down, and the party tries their best to hold off both the large hut and Baba Lysaga. 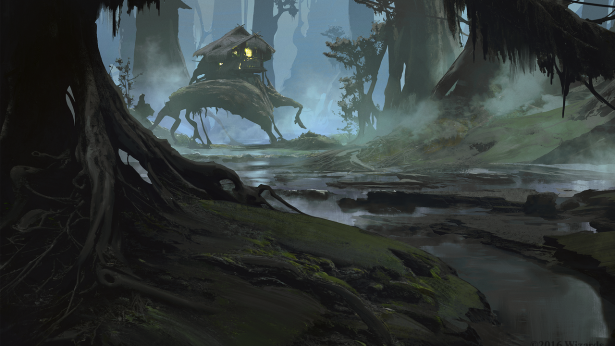 Krossa comes up to the hut and tries to smash its root legs with his hammers. Ezmerelda manages to hit Baba Lysaga with a very powerful fire bolt spell, still invisible. Cairie, some distance away, slams her flaming sphere against the hut, and then hides behind a bog tree.

The hut snaps the rope around its legs and stands back up. It stomps on the unconscious Fletcher, and then stomps twice on Krossa, who survives both hits, as a primal rage drives him. Baba Lysaga casts sleep on the group, and successfully takes down Malis, but no one else.

Panic begins to beset the party as their powerful spellcasters are nearly all down or dead.

Krossa continues to attack the hut with his dual hammers, dealing decent amounts of damage with his multiple attacks. Ezmerelda starts casting magic missile at Baba Lysaga to bypass the difficulty in hitting her within the flying skull. Cairie continues to hit the hut with her flaming sphere, and then successfully fires a sneak attack arrow at one of its legs, snapping a major support root and dealing massive damage.

Baba Lysaga then tries to cast sleep again, now targeting Cairie too. Cairie, being elven, is unaffected. However, Ezmerelda’s invisible form splashes into the swampy water.

Cairie is now the last party member standing….and, reviewing the situation, she runs.

Cairie runs, letting the flaming sphere dissipate, and uses every action available to her to get as far away from Baba Lysaga as possible. However, Baba is faster flying in her skull. She chases after Cairie, and chucks a huge fireball down at her. Cairie evades, and takes minimal damage yet again, and then continues fleeing.

Baba Lysaga tries to polymorph Cairie, but the elf withstands the spell, continuing to run. Baba Lysaga, tired of nothing working, fires several magic missiles at Cairie, successfully hitting her several times, and knocking her unconscious.

The entire party has now fallen to the ancient witch, Baba Lysaga.

Some time later – no one can be sure how long – Krossa, Khurz, and Fletcher awaken inside a familiar sight – Baba’s hut. It doesn’t seem to be moving, and they don’t see Baba anywhere either.

They find themselves disarmed, but their other equipment is still intact. They search the hut, and find a crib in the middle of the small space, with an angelic, adorable baby lying in it. Fletcher immediately tries to wave his hand against the baby’s face, and it passes right through, an illusion.

Krossa notices a faint glow coming from beneath the crib. Fletcher tries to kick the crib aside, but his leg goes right through – also an illusion. Krossa bends down and pulls up the floorboard to find, hidden beneath it, the last of the three missing green gems from the Wizard of Wines Winery.

He reaches in to take it, and the whole hut starts to shake and rumble, as if getting ready to move. Krossa quickly pulls the gem out and the hut immediately stops. He hands the gem to Fletcher, who puts it in a pouch.

Khurz goes outside and tries to search for tracks. Inside, Fletcher finds a wooden chest with iron bands and goes to check it for traps. He feels sure that it’s okay, but warns Krossa to step outside anyway.

Alone, Fletcher opens the chest, breaking a glyph of warding, and taking a ton of thunder damage as the loudest noise they’ve ever heard goes off in the hut. Khurz and Krossa come up to the door to see Fletcher sitting there, trying to clear his ears.

Four crawling claws come out of the chest and attack them. The experienced-though-weaponless adventurers make short work of them. Angered, and fed up with Barovia in total, Fletcher spitefully searches through the chest.

He takes out a polished rock, and gives it to the dwarf Krossa, who recognizes it as agate. Krossa pockets the rock.

Fletcher finds two rolled scrolls, and gives them to Khurz, who recognizes the spells as mass cure wounds and revivify. Khurz keeps those.

For himself, Fletcher keeps a set of strange, macabre-looking musical pipes, a vial of shimmering oil, and a leather pouch of shiny sling bullets.

After searching the rest of the hut and finding nothing else, they start to head outside.

Meanwhile, Malis, Cairie, and Ezmerelda all wake up in their own cell in a dungeon. They stand in five feet of water, and can all hear each other, so their cells must be attached or near. A gruff voice calls out, asking who they are.

Malis can see in the cell across from her in this small, cramped space, a swarthy man in shredded clothing.

They all find themselves unarmed, but Cairie has her thieves’ tools on her, so she successfully picks her lock and steps into the space between the two rows of cells. She finds Ezmerelda next to hers, and frees her. Then, she finds Malis and frees her.

The man in the other cell asks to be set free, and says he can help them get out of here. He says he’s just a man from Vallaki, and was chased by dire wolves into the castle, where he’s now a prisoner.

Malis asks him to confirm, nearly terrified, “into the castle?”

Yes, they are inside Castle Ravenloft.

Malis curses loudly, banging her fists on the iron bars of the cell door. Cairie reacts similarly. Ezmerelda tells them to stay calm. She has been here before, and she might know a way out, if they can get to somewhere familiar.

The man says he can help too. His name is Emil Toranescu, and he just wants to get back to his wife.

They agree to let him out, and Cairie opens his door. He is very grateful, and asks how long they’ve all been in Barovia. They say it’s been some time, and he asks if they’ve seen his wife, Zuleika.

Malis asks if she’s the same Zuleika that they had met, the leader of the werewolf pack. He confirms, and is so incredibly happy to hear that she’s now the leader. He says he is so happy to help them now.

Malis, unfortunately, reveals the truth – that Zuleika is dead. She says that they helped Zuleika escape the pack that killed her, and that they healed her and brought her back from death, only for her to be killed again by a lightning bolt that was likely sent by Strahd.

Emil’s happy demeanor immediately saps, and he says that he was a fool to hope. He agrees to help them still, however.

The four of them manage to open the door to the cell block, and start to leave.

HOLY COW! I was NOT expecting this to happen. I had prepared for it, sure, but I was not expecting it. I thought they were gonna clinch it, in the very last moments, and defeat Lysaga. It was so strange, the way I was hoping for BOTH outcomes to happen.

But I did it, I finally performed a TPK. Or, total party wipe in this case. They’re not dead. I would never do that. Killing the whole party for losing an encounter is just…I dunno, so not worth it. So unsatisfying. They were all knocked unconscious, and then Baba went to work.

I read on a Reddit thread something I thought was rather genius. That Baba Lysaga is a bit of a conundrum. That she hates men because she sees them as a threat to her precious Strahd, and the last thing she would do is send men any closer to Strahd. So, she kept the male party members in Berez to do with what she pleased, and sent the “weaker” women to Strahd as a prize, as potential brides maybe. She doesn’t fathom that the women could ever supplant him. The conundrum being that she, herself, is a very powerful woman.

So that was my plan if I TPK’d.

What will happen next? Where will the women and Emil go in the castle? How will they escape? Will they escape? What about the men? Can they make it out of Berez without detection? Will they find the sunsword? Where is Baba Lysaga? Find out next time, in “Regaining Strength!”

Until then — Well Met!