My group of players and I sat down for a virtual D&D game session zero for the new campaign I will be running: Ghosts of Saltmarsh! This is a chronicle of their tale. (This post contains spoilers for “Ghosts of Saltmarsh”)

And so we begin a new campaign adventure! I have a new group of players sitting in to join me on this journey, and I am very excited to be running a sea-faring D&D campaign!

The following are the details for our session 0, which I ran recently, and have since weaved together the tapestry of all the player-character’s backstories with input from each of the players, and suggestions of my own to help root them firmly within the region and the salty sea-town. 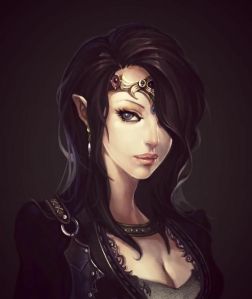 Ravenna is a very interesting character to me, and I really like where my player came from with her backstory and origins. Very special was how she chose the Aereni subrace option, which is a race of elves that live on a very isolated island in an almost commune-like existence.

Because this campaign is sea-faring, and there are countless possible islands out in the Azure Sea, this was an easy and fitting choice for her. The decisions we made together on how Ravenna went from that island community and into “Ghosts of Saltmarsh” is super cool and I cannot wait to further explore this character’s story.

Oh, yes. The lutrinian homebrew “otter-folk” race, found here on the DM’s Guild, is one of my favorite add-on content for D&D – mainly because I LOVE river otters. So I was thrilled when my good friend and player chose this race for my game.

Cha-Cha is an aspiring bard, but with deep roots in Saltmarsh, and a family of fishers going back generations. I really like what my player and I cooked up together. He was looking for something simple, and I already had an idea for this character’s backstory, with a way to tie him intrinsically to the location, and he also holds the key to the very beginning of the entire Saltmarsh campaign!

My favorite part about this character is that he will be a pretty important representative of the crown within the party. If you don’t know anything about “Ghosts of Saltmarsh,” I’ll explain why this is significant. The town is divided into two parties, two ideals: the Traditionalists and the Loyalists. The Traditionalists are mainly the Saltmarsh natives who don’t want their way of life to change, who rely on their small community for the security of their livelihood. The Loyalists are just that: loyal to the crown of King Kimbertos Skotti, ruler of the region of Keoland – which includes Saltmarsh.

The King has been sending representatives to Saltmarsh over the past few years, hoping to put an end to the rampant smuggling there, and turn Saltmarsh into a booming port town for Keoland. This kind of change would absolutely threaten the way of life for the Traditionalists. Faban, here, is a wizard of King Skotti’s court, and actually knows personally Eliander Firebrand, the captain of the Saltmarsh guard, another Loyalist. Faban comes to Saltmarsh to investigate the progress of the King’s plans.

My wife joins this campaign! She was going to play a gnome wizard – but decided to step out of her comfort zone (of always playing a gnome) in order to balance out the party a bit (especially since we lost a fifth player, who had chosen the barbarian class, due to time commitments). I’m very excited to see what becomes of this character, as we’re using a homebrew background in order to root her in the region around Saltmarsh: the Monster Hunter.

So Chips comes from the city of Burle to the north of Saltmarsh, and grew up in the Silverstand forest, where the wood elves there raised her to hunt the monsters within the evil Dreadwood. She knows Kiara Shadowbreaker, the castellan of Burle, and was sent by her to Saltmarsh to investigate the reports of a monster making it out of the Dreadwood and heading toward the sea-town.

And those are our characters for “Ghosts of Saltmarsh!”

I spent the last week preparing for session 1, which should be happening soon – as soon as all the players’ schedules allow. I wrote everyone’s “sunrise” into the campaign, which will be included in session 1’s notes. So keep your eyes here, on Well Met Adventurers, for the start of those campaign diaries!

Until then, Well Met!

One thought on “Ghosts of Saltmarsh – Session 0”